I was not unlike many other young boys or girls who were infatuated by and dreamed about the horse. My suburban home in Inglewood, California adjacent to Hollywood Park Race Track beckoned me. From the proximity of my bedroom windows, I could hear the starting bells, the cheering crowds and pounding hooves that at the time was only accessed by my imagination and the book The Black Stallion. My youthful exuberance towards horses finally convinced my big Sister who relented, taking me to the morning workouts at the track.  The strangely familiar smells and ambiance with the horses emerging out of the morning fog on the track convinced me that horses were about to dominate my life.

I was an angry young man after losing my father at the age of six. My name rhymed with banana and I had very kinky curly hair. I was relentlessly teased. The only way I could cope with these conditions was to overcompensate with every aspect of my life. My athletics became my way out of this dilemma. I was a very clumsy youth and soon with my brothers help developed into a strong dominating competitor. Even with this compensation, I still experienced the teasing.  I became a very controlling person. An innate voice continued to occupy my head. I had been taught by my mother to be a caring, kind and courageous person who was not afraid to be true to myself. Even with this instilled motivation, my anger and controlling nature would affect my dealings with the love of my life, the Arabian horse.

My dreams came true with the building of my own Arabian horse ranch that was populated with the precious horses I dreamed about so often in the books by Walter Farley. I realized, after many years of following the Arabian horse across the country, that my anger was my downfall. I followed a dominating form of training that included intimidation and fear to elicit the beautiful movement and attractive traits that the Arabian horse was known for. After my beloved young stallion, during a training session reached out and bit me savagely, I realized what I was doing wrong to the horses that I loved so much. I experienced an epiphany after that experience that launched me onto a path180 degrees from the submission I sought from my horses. I immediately understood the innate small voice I heard since my youth to be kind, have the courage and be true to myself.  I was fighting against and ignoring this counsel to my disadvantage. There was another way to achieve a horse’s cooperation without force or submission. I embarked on a search for the answer. My belief in a Divine Creator God and the mentorship of influential horsemen throughout the world has led me to an understanding that there is another path to follow when becoming a partner with your horse.

There is a message of redemption for souls who have lost their way. 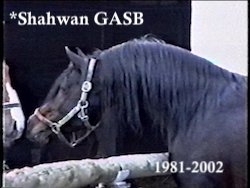 Get up when you fall and never give up. Never fail to follow your dreams. Failure is just a step on the path. The “realist” sees his path, the “dreamer” has already been there on that path.

I want to attribute to my Soulmate, the Arabian stallion, *Shahwan GASB, also my good friend Darik Anderson who helped change my life. The strong and gentle character they exhibited that beckoned me on a journey toward becoming a “Horse Listener”. For a horse whispers to us and we become the listener. And to my mentors Frederic Pignon and Magali Delgado, the co-founders of Cavalia who are, in my opinion, the finest and most sensitive horse people in the world.

My motivation in embarking on this path in life is based upon my desire to help change the culture of force and submission that exists to the detriment of our horses. My desire is to guide the youth and new horseman in the world to embark on a path different to mine when starting a life with the horse of their dreams, especially the majestic Arabian horse.