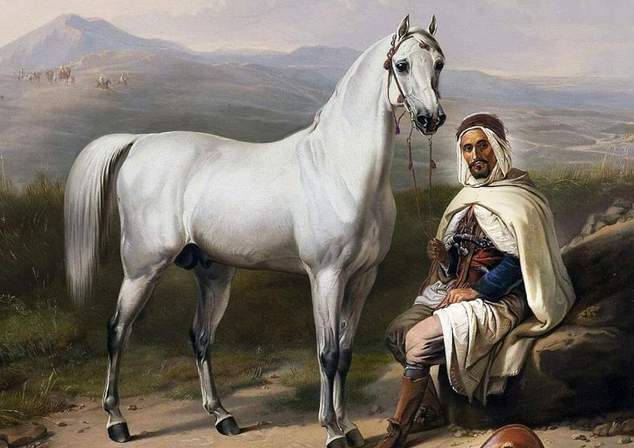 Mike Chapman was a person my family had come to respect, an eventual mentor to my dad and me. My dad had recently moved to Central Oregon from California after the death of his father to cancer.

“Babe” was a mare my dad rescued from a kill buyer at the local auction. desperately needed help with their first horse. It was recommended that Mike, our truck driver neighbor across the street, might be able to help. Through the divorce and the dispersal of his entire herd of Arabian horses and the death of his soulmate, Mike had entered three long years of depression driving his truck with the thought of never being with his horses again. My dad’s mention of “a horse” sparked Mike’s attention.

That fateful meeting had a major influence on my young dad and eventually on me. Coincidentally, Mike was the breeder of Babe’s dam, “Countess Majestic”. They found out through the family of Babe’s past owners that my dad’s new mare had a registered name, “My Majestic Princess” or as my dad had called her “My Miya”. I was excited to see Mike enter my life as my “surrogate-grandfather”

I was only sixteen years old when Mike and my dad came to me with a request.

“Are you willing to work with Dazshtan and his full sibling filly when she is born? We need to bring them into our world using the methods and philosophy that we both have taught you?”

“Of course, I will. You know me! I have been horse crazy my whole life. It will be a challenge I gladly accept. You know, I was anticipating this request. I dream about things like this. It is like a spirit has been telling me that this will happen.” I said excitedly.

“Dr. Marsufi has agreed to place you as an apprentice at his Stud in Cairo during the summer season,” Mike added. “It is a different culture there. Girls need to follow strict Islamic guidelines.  Wow, what an opportunity for you to learn more about the Arab and his horse.”

“Mike, I will try to observe those customs. You know me. I am very strong-willed. You will need to school me on their traditions for women, especially rules about dress.”

I learned the history of the Arabian horse in my club meetings, but not about the culture of the Arab world. I could hardly wait. What a way to learn!

Arrangements were made to place me that summer. Dazshtan was born in February. This colt is the replacement for the precious bloodline of *Shahwan GASB who had died 23 years earlier. I knew of the responsibility to undertake the adventure before me.  It was necessary to get busy with his schooling before I left for Cairo.

Mike has always told me that developing a relationship, especially with a colt, should start soon after birth. Dad learned from Mike, his mentor, about the instincts of man compared to the horse, predator versus prey. He taught me at an early age about handling all sorts of animals of all ages at the Vet clinic. I considered myself a good foal starter. Mike trusted me with many of his foals at his farm in Alfalfa, across town from the Vet clinic in Tumalo.

Dazshtan was just as hardheaded as I was. He displayed though, all the innate attributes of self-confidence he inherited from his sire and dam, the traits developed from the desert, and the skillful breeding prowess of Marbach State Stud of Germany. Right from the start, He exuded an air of royalty about himself. He was a beautiful bay like his sire Shahwan, with a star on his forehead. One white sock on his right front foot and another white sock on his left front foot with big expressive eyes, a wide forehead with tippy ears pointing inward, and a short exotic Arabian head. Typical of the Arab trait, he had amazing lung capacity and strong bone density.

He knew he was a colt and would challenge me often. I would quietly show my leadership, sometimes having to bite my tongue.  “Never show anger. Never use force” would ring through my mind. But the look in his big eyes expressed his royalty.  I couldn’t help but swoon. I would see his dam reiterate the lessons I taught him. After all, I was following her example.

We would walk around scary things. Mike built pedestals for us to climb on. I would pony him often, much to the chagrin of Inny, being separated from her foal. Dazshtan would soon show his independence and confidence, as much as possible.

I would snuggle with both of them in the stall. That little colt was worn out after our excursions. Soon, he would follow me, but I was always wary of his strength and independence. He really started to grow on me.