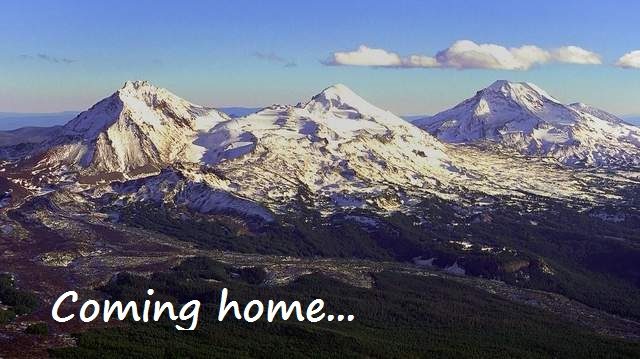 The Homecoming.
My sweet family. Inny, Dazshtan and Bint Shahwan

West of Bend Oregon, there appeared out my window of the shuttle flight from Portland, the majestic Three Sisters Volcanoes and the High Lakes where our family spent time as I was growing up. A vast contrast to the dry desert and green Nile River delta of Egypt. Mom and dad along with Phil and Marion, my two siblings, met me at the airport with a big balloon saying, “Welcome back world traveler”.  My mind was filled with information I wanted to share with them.

But, close to my mind was a desire to get home to be reunited with my charge, Dazshtan. Mike met us at the plaza downtown for dinner. He quizzed me on what I learned while I was at Al Ahman. I said, “I worked my fanny off.” Mike chuckled at that comment.  Being there at the Stud for three years himself, he was anxious to hear about the news of the new arrivals from foals related to his mare Shahwanyssa. I shared with him that those foals from his mare were busy with the next generation. Shahwan’s traits were passing on to those new foals.

Mike knew what I would experience in Cairo. The principles I learned from Mike and my dad while working with those foals at home were seared in my brain. I thanked Mike for the trust he had in my abilities.

I passed on to everyone the greetings from Amir, Walter and the staff at Al Ahman. Mike let me know that Dr. Marsufi was very proud of me. He had just spoken to him on the phone. He called to see that I arrived safely.

Upon returning to Tumalo, I was besieged by my friends with questions about my summer. I felt more confident to share with them my experiences with the horses as well as the culture of that part of the world. There had been turmoil in the middle east with countries that bordered where I had been. I didn’t pay attention to the politics, but my experience with Rashad taught me that our attitude in the western world was quite different. We seemed to be lacking in the self-control that Rashad was taught in his culture. He was being groomed to take over for his father’s role as the Sheykh. The responsibility he faced was immense. Fostering the generations of future bloodlines of the Arabian horse in the many nomadic Bedu horse breeding tribes.

Rashad did compliment me about Shahwan’s daughter Shahwanyssa who had spent three seasons at Al Ahman.  She produced three fillies that are already producing their own foals. He witnessed her stamina demonstrated at the Ruala tribal tents during Mike’s visit six years before.

RA Inshallah (Inny) had been bred back during her foal heat and was pronounced pregnant to Shahwan before I left for Cairo in April. I was full of anticipation for her birth that coming February. Rashad didn’t know of the plans we had to replace the foundation mare of the Ruala tribe. He did seem sad though, about something while he was there that summer at Al Ahman. Did he attend there to learn how to step into his father’s footsteps? I don’t know.  The passion for the Arabian horse of the desert lived in his heart.

Inny was five months in foal when I returned from Cairo. I knew when she saw me from her stall as I entered the barn, she would sing out a big heartful whinny. Like she said, “where have you been?” My parents were astonished how she took to me so quickly when she arrived here from the desert with Mike.

I vowed to Inny that I would be there to hug her foal during her gestation. It was September when I would return. I still had five months to carry out my pledge.

All the mares in the barn whinnied at us as we entered the barn. Inny especially remembered me and called out to me. I heard a high-pitched whinny that occupied the stall next to her. I gave her a big hug and entered her stall. Dazshtan, not a little colt anymore at seven months of age, reached over the stall wall and saw me. I excused myself and went over next door to greet my special colt. He noticed my scents were different from all the odors of the desert oasis I had just come from.  He remembered all that I had shared with him. He let me snuggle a little before he let me know that he was the king of this barn.” On the contrary”, I said to him. I gave him a big goodnight hug as his sweet smell that was so familiar to me wafted into my nose.

Every day after I worked with Dazshtan, I would enter Inny’s stall with a warm churdle from her. A nice brushing for Inny would ensue as I talked to both of them. This foal was not as active as Dazshtan was. I sensed deep down that a filly was in there. The royalty of RA Inshallah, the pride of the Sheykh entrusted to Mike, seemed to be transferred to me in those precious moments shared with Inny and her foal. This was Mike’s soulmate Shahwan’s second foal from frozen semen, since his untimely death.

During Inny’s gestation with my Dazshtan, her first expected foal last year,  my dad would encourage me to hug that belly and talk to the growing foal inside of her. I would visit that mare often. A strong trusted bond began to develop between the three of us. We seemed to telepathically communicate. Mike would tell me how he would end up training the foal before they are even born. He had already done the work with the sire and dam to ensure trust and learning of the basics of life in our world. Those traits the parents learned would be passed on to the newborn foal similarly, as instincts they inherit to outrun a predator in the wild.

One day, Inny was in the crossties as I entered the barn. Without a word or a sound from me as I approached her from afar, her belly began to jiggle wildly until I made it to her side. “It’s fine”, I said, “here I am, you wiggle worm”. Slowly, little one’s exuberance would settle inside as we all communed together, proud momma and I.

I had learned these finer things from a line of sensitive horsemen. They have passed on traditions and values going all the way back to the desert horse breeding tribes. These things have a spiritual foundation. My father passed on to me, the passion for God’s creation, the Arabian horse as Mike Chapman, the truck driver across the street, Walter Heuser, and the Sheykh R’ Ammeri had from their ancestors. Now, here I was ascending in that line of horseman.

RA Inshallah (Inny) is a result of hundreds of years of skilled breeding and testing through the rigors of the desert and I was there with her expectant foal and her colt Dazshtan. These two foals’ sire, Shahwan was closely related to the desert also through his Egyptian heritage. The Sheykh revered his deceased mare,  Ashreen Arnaza, and her filly RA Inshallah. He entrusted Shahwan to pass on greatness to her bloodlines.

I am reminded of the Arabian mare’s devotion and purpose in the tribal culture, from raising her foals comingled with children in the tent so tenderly, then conducting her master into battle courageously, conveying him back even though she herself might have been injured. These traits are being passed on to Dazshtan and her expectant filly, I hope, Bint Shahwan. My responsibility in educating these foals was awesome. At a young age, I was determined to fulfill my destiny with my family and my horses.