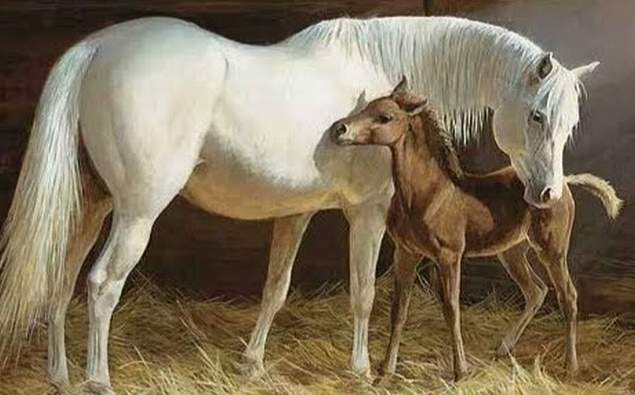 Ophthalmology, which my mother’s practice is based, captured Rashad’s interest right away. He expressed to my mom a desire to learn more about the eye of the horse.

“Sitt (Arabic fo Lady)Peters, Many generations ago, my tribe had issues with the sandstorms in the desert passed on through the stories of our ancestors. We have ways to keep our eyes protected from the harsh conditions, but the horses are different from the camels. Camels have two rows of thick eyelashes to protect their eyes from the desert dust.  They are able to close their nostrils and their lips to keep out the harsh wind and desert dust. But Sitt Peters. Excuse me please, Sitt Peters. How do you wish to be addressed? It is different in my culture.”

“You can call me Doctor Peters, but my daughter just calls me mom”.

“I see. I am learning the customs of your culture slowly. My father would bring his horses into the tents with him when the sands blow hard. We sometimes had to stay outside covered with our shemagh and thawb. A headdress and a cloak. We learned that he was obsessed with protecting our precious mares from the sandstorm. He says it has been a tradition passed on for generations of his people.”

My mother was feeling rather empathetic toward Rashad and his father the Sheykh.

“There are really no ways to protect the eyes of the horse from those terrible conditions. I think your father had the best idea as you kids did to protect yourselves. When there are no tents around, your garments did a great amount of protection for them. I know how your father feels. My practice sees many cases of such injuries to the eyes of the mammals I serve”

“Bi kulli surur. Now how is that Rashad?

“Alright, you three”. My dad motioned us to head into the barn where Mike and Walter are waiting with our two Shahwan kids. Inny was with Bint in the lunging arena and Dazshtan was anxiously waiting for me in his stall since his neighbors were in the arena without him.

“Rashad, you were a young man when Mike visited your tents”.

“Walter, I remember Mike. I was only a child when he ventured into our presence. Like you Walter, you both bear the copper bracelet my father bestowed that signifies adoptive membership of our tribes”.

“Wa ‘Alaikum Assalam.” Walter stressed a very important relationship we all shared, the love for the Arabian horse, and how that had brought us all together. The horse-breeding tribes and the relentless search to provide a legacy. This tradition will continue as our family grows and our children follow the principles laid down by the past generations of the horse breeding tribes. It is great to have you here Rashad to see more of the contribution that RA Inshallah has brought to us along with her two foals by Shahwan.”

I brought Dazshtan out to meet everyone. He proudly strutted with his two-year-old bravado as he passed by his dam, Inny reached to greet her son while Bint watched and gnawed and chewed showing respect to her full sibling. I let him show the strength and leadership that he well deserved. It was like the horses in the barn bowed as he passed by them on the way to the arena. He was the first Shahwan son to be born since his sires’ death. His heritage was well apparent. I handed him off to Mike. There was an air of dual respect as they both walked around the arena. I was learning from Mike to allow Dazshtan to express himself, but with me and Mike as his alpha. There was a balance that was obtained while allowing for Dazshtan’s bravado.  Mike had a similar relationship with Shahwan. When Shahwan needed a reminder, just a clearing of Mike’s throat would bring back a partnership built on trust and respect between those two. This concept was being bestowed on this young colt. I was hardheaded, and I still am. I often ran into a hardheaded colt, but the six golden principles Mike learned from his mentors and taught to me would ring in my ears.

Like I have learned many times from Mike, a colt or a stallion can sense the person that handles him. Depending on how you respond to the colt’s actions tells a lot about the lessons the handler has to learn.

Interesting. Dazshtan showed Rashad a challenge to who will be the leader in this circumstance. The same reaction I saw in the stall with Rashad came clear. Respectfully, Mike explained to Rashad what had occurred. He explained that Dazshtan was a colt looking for another colt, in the person of Rashad, to interact like two young colts would with each other. He was testing who was to be the leader. Understanding the nature of the young colt in advance would allow for the colt’s exuberance. By keeping a distance where the colt could not reach Rashad and using quiet but firm reminders between the two of them, it would not be necessary to use an aggressive means of discipline to discourage a natural desire for Dazshtan to play with him like he would with another colt.

Rashad showed affection for the horses he handled but he would react too harshly to discipline them. I know how Rashad felt while being watched. I went through the same lesson with Mike. I could not react naturally using the principles Mike taught me. When I was by myself with Dazshtan, my confidence was strong, and I did not make the same mistakes pointed out by my mentor. I was sure that in the next few days Rashad would be able to experience the same confidence I developed.

We couldn’t help but notice the two greys who awaited our entourage. They were trotting around the arena blowing and raising their tails.

“They are asil (noble)”, remarked Rashad as he approached them,” And that filly is royalty next to her dam RA Inshallah”.

They attracted our attention as well as her full sibling Dazshtan as he returned to his stall with Mike adjacent to his dam’s stall. I shared with Rashad the technique I learned from Mike about the education of our foals. We bring foals into our world fraught with dangers away from the wild. I explained to him that our covenant to these horses in our care is to provide for them the safety they desire above all else. As my guest entered the arena with Inny and Bint,

“I agree. It is my father’s vision and mine to maintain and preserve the gift, Hisan Arabi, that Allah has created for us. It is true that the horse and the camel have provided for our people in the desert the means for survival. We don’t take lightly their contribution”.

I felt reassured that this young man’s heart was in the right place. I still had a reservation about him that bothered my spirit.

I was told not to let Rashad in on our plans to bring Bint to the tents of his father to replace Ashreen Arnaza, “the jewel, his treasure, the light of his life, the enriching one” the foundation bloodlines represented in that mare from generations of the horse breeding tribes. I had come to appreciate how important her contribution was to the continued fulfillment of their legacy. I asked Rashad to keep the gift a secret until we can surprise him one day in the future. He agreed because he too had a great fondness and appreciation of Bint’s grandam.

During the next two weeks, Rashad and I witnessed the daily routines of my mom and dad in their practices. Rashad had many questions for my mom. As we were told that no question was a bad question, that helped to quell any fear of discovery. My dad relished an inquisitive student. Rashad and I both dug deep with our questions. We seemed ready to push forward with our apprenticeship at Al Ahman.

My mom asked me to speak with her privately before I drove Walter and Rashad to the airport in Bend.

“I wanted to tell you something I had realized about Rashad. He looks so familiar to me”.

“Mom, you have seen too many home movies that Mike had brought back from the desert and the tents of the Wadi Sirhan. Maybe that is why”.

“Anyway Josie, I think he is a fine young man. Maybe you can speak to him about observing that quiet innate voice from his maker, to have courage, be kind, and be true to yourself”.

“He reveres Allah mom. I have lots to learn of his culture.  God created the horse for us. Right mom? Looks like we both have a lot to learn”.

As Walter, Mike, Mom, and Dad met together for one last time before we left, Mike had a few words of wisdom to bestow on us he learned from his mentors. Words of Stephan Segal, the Samarai-educated martial arts actor. He added words directed to real horsemen.

“When the tiger dies, we take his pelt and mount it on the wall. His pelt, is what he is remembered by. When a real warrior or horseman dies, he will be remembered for what he did in life. His ability and desire to teach, and what he left his students and the world. Remember, the development of the physical man and the perfection of his spiritual self is the same. Doing these things simultaneously, we learn first and foremost, how to make the world a better place and help others. That is what we call a legacy. It’s another reason why we teach these things with our horses. The opposite is the shame about the tiger and the way the tiger dies. We look at his pelt on the wall and we think, wow, it’s beautiful. When a great warrior and horseman dies, he has left a real legacy. These people have real morals and decency. They admire the people who have technique, they have history, they have “teachers”. The real legacy left does not leave a tarnish and says who these individuals truly were. When the mouth is the only way of expressing, “I can do this and I can do that”, these people can’t name their teachers. A true horseman and warrior will remember who their teachers were down through the years and left through their legacy. Everything is in the teacher”

“Please tell your father that I will see him soon. I wish him health and happiness with his horses. You are welcome to return to our home any time Rashad”.

With this, we headed to the Bend airport on a clear yet cold day.