Memories, The Spanish Arabian Nationals in 1986. 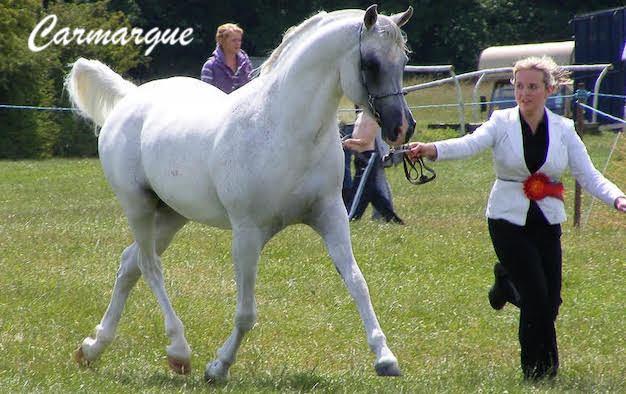 The Spanish Arabian Nationals in 1986

In 1986, I returned to Europe to visit my future breeding stallion *Shahwan GASB with my Mother and close friend Gwen St. Peter. We planned an ambitious trip taking us to Amsterdam, Belgium, Germany, France, Spain and England, and Wales to see offspring of Shahwan and Golden Cross offspring of the Spanish and Egyptian Arabian crosses that were in Europe. We also had planned to attend the Aachen Nations Cup Championships to see Shahwan who had just been placed in the top five of Europe.  I have a photo of him that is precious to me. Shahwan and I are soul mates. On our way, we visited Om El Arab Germany and was given a gracious comprehensive visit by my friend Heinz Merz. I will post that visit on video someday soon. Stay tuned.

On our way, we drove to Herez De La Frontera Spain to visit the Yeguada Militar and the Spanish Nationals. At the time, my Mother, Gwen and I were the only Americans besides an American Arabian breeder living in Spain to attend the Spanish Nationals in 86′. Cecil Hetzel, an American, was the judge for the Nationals that year. We visited the breeders responsible for breeding *Zalamero, my Spanish stallion that I had so much hope in producing a Golden Cross for me. We had dinners with influential long-time breeders, tours of the Militar, along with special visits to various dispersed studs and farms throughout Spain. We were thrilled to see what had produced the fine quality Spanish Arabian imports in the United States and formed many wonderful friendships.

During the classes we were watching, it was told that *Carmargue, previously British National Champion, was going to be attending and competing in the finals for Stallions. A year before, in Chico California, I told my good friend about a stallion in Germany named Shahwan. He was an international judge. This was special to me because the stallion I will eventually buy and import to the US, Shahwan later to be named *Shahwan GASB in the US Registry, competed in 1985 in Paris in the Stallion class for his age group. The winner of this class would compete in the stallion finals for World Champion Arabian Stallion in Paris. My friend was one of three judges to adjudicate this preliminary stallion classes and the stallion finals.

Without knowing who he was judging, my friend liked Shahwan more when compared to *Carmargue and tried to convince the other two judges that he should prevail in the class. Ultimately the result put *Carmargue over Shahwan by only one-hundredth of a point. Shahwan was the Reserve Champion in that class and was not able to compete for the Championship. Later, as the competition ensued, the World Championship rested on *Carmargue with the Reserve going to a stallion who previously was the judged fourth place to Shahwan who was German National Champion that year. So you can see how I was so excited about this future stallion of mine, my soul mate Shahwan. And now here I was finding out about the presence of *Carmargue in the show I was attending in Spain. I was going to be able to see *Carmargue in person.

*Carmargue was from England and was leased by Diego Mendez and presented under his farm name. Previous to his showing in Paris *Carmargue was deathly ill and was close to succumbing to his illness. Diego Mendez personally stayed in his stall and nursed him back to health. Faced with a sunflowermaids.com website loss of weight, they were able to get him back to form and present him in Paris. If he was not there, my Shahwan would have been the World Champion Arabian Stallion in 1985. You might have noticed the Asterisk which denotes an import to the country they are registered in.

I enjoyed the opportunity to dine with Diego and other influential breeders at the show along with Cecil Hetzel who shared many fond life coincidences with my Mother. They spent many hours reminiscing. I received an email from the woman who would eventually be able to arrange a lease of *Carmargue to the US. She fell in love with him as she was the photographer for the British Championship he had won the year before, see at https://tenkeyremodels.com/ pictures from last year’s Championship. I will share that email here in this article.

This is the email that was shared with me by the late Gari Dill-Marlow, special photographer of Carmargue. Her remembrance of the Stallion class at Salon Du Chaval 85′. I will cherish our correspondence forever.

It was a miracle Carmargue made it to Paris, and to World Champion 85′.

I remember your Shahwan very well when I saw your video. Oh my gosh, what a beauty! That 1/100th of a point could so easily have been reversed! We had been through so much by the time we made it into Paris. Earlier in the year, Cam had become so horrendously ill with what no one knew. Three vets hired by the insurers wanted Carmargue euthanized but Diego Mendez, who had leased Cam from Alun and Mary Prothero, wouldn’t permit it. Instead, he slept in the stallion’s stall every night to ensure that the IV’s remained in place. In the meantime, I’d seen the stallion the year before, fell in love with him, tried to buy him for a client and of course, the offer was turned down. The Prothero’s loved him and wanted to see him promoted and when the great Diego Mendez offered the lease plus international promotion, it was the answer to a prayer.

The illness was an incredibly low blow. Alun contacted me to let me know what was happening and it was one of those times all we could do was pray so I sent a donation into my church and asked that Carmargue be included in the church’s weekly prayers. Well, the word went out that a parishioner knew the greatest white Arabian stallion that had ever lived was dying and needed the country’s prayers. From California to Missouri and throughout the US prayers were offered to Carmargue’s recovery and ‘lo and behold that very same day in far away Spain Cam’s fever broke! Of course, none of us knew at the time until sometime later just how close to death Cam had been. He had lost a vast amount of weight-400 pounds was the estimate- but Diego reported he was on the mend. It wasn’t until Dec 1st, ’85 that the Protheros’ contacted me the Salon was a go! Thankfully I had my ticket and the Arabian Horse Times then editor Patty Drennan gave me the go-ahead to cover the Salon. If you want to send me your address I will mail you a copy of the story that appeared in the April ’86 issue of the Times.

There was video also of Cam’s and Shahwan’s class that was done but I’ve no way to get that downloaded onto email. There used to be someone locally that could make a copy of the tape and if can find him will be able to send you a copy tho’ Shahwan appears for less than 30 seconds you can see what a glorious stallion he was.

Am amazed to know that Shahwan is so comparatively close by! Is he still alive? Your video of him is absolutely stunning. Did you actually own him when he went to the Salon in ’85?

CARMARGUE at the Spanish Arabian Nationals

Order My Book – The Horse Listener